When I was growing up, we had dinner at my grandparents' house on Sundays.  Grandma was a wonderful cook, though she would never admit it.  She made the best pot roast and absolutely divine fried chicken.  And one day I'll get the cast iron skillet she used to make those wonderful meals.  (unfortunately, it doesn't come with her recipes, her skill or her experience....)

After dinner, Grandpa would invariably ask "Would anyone like some blueberry pie?" to which we would always answer "Yes!" and he would respond "Guess you'd better go make some!"  I do love a good blueberry pie even now.

For some reason, blueberries were a screaming deal at all of the local grocery stores this week.  I couldn't pass that up, and I decided that I would can some blueberry pie filling so that we can have fresh blueberry pie at the drop of a hat. 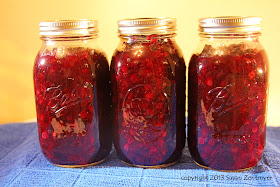 1. Wash and dry the blueberries and set aside. Sterilize 3 quart jars along with the lids in boiling water or in a dishwasher run without soap.

2. In a large stockpot bring the water, sugar, tapioca and lemon juice and to a boil.

3. Pour in the blueberries very carefully and bring the mixture back to a boil, stirring continuously with a long spoon. Keep stirring for about 5 minutes while the berries release their juices and the mixture thickens, becoming blue and glossy.

4. Set a funnel over a quart jar and ladle in the blueberry mixture, leaving about 1″ of room at the top. Repeat with second quart jar.

5. Placed the sterilized lids on the jar and seal them with the rims, only tightening the ring as much as you can with your own hand.  Place the jars in a pot of boiling water standing on end. Make sure the water covers the tops of the jars. Boil for 30 minutes, starting the timing when the mixture has returned to a boil after the jars have been added. 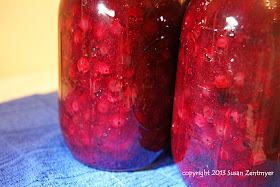 Doesn't it look blueberry-licious?  These can be used like canned pie filling.  After opening, bake a covered or uncovered pie, using a 9" pie crust. For uncovered, place dabs of butter on top of the fruit. Optionally, you may mix in 1/2 cup heavy cream to the pie filling after opening and before baking.
Bake at 425° F for 1/2 hour and then reduce temperature to 350° and bake 1/2 hour longer.

You can use this same basic process for many different fruit pie fillings.  These jars make a nice hostess gift, and are great to have on the shelf for a quick dessert.